Skip to Content
Home Blog Art HOME, AWAY FROM HOME II
by 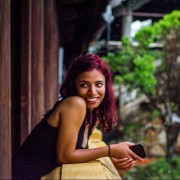 Who knew a place where I came to see and get involved in a cultural fair could give me so much more than that, in terms of inner peace, a sense of tranquillity and lifetime memories. The last evening was unforgettable. It started pouring and hence the celebrations had to be interrupted in between, but I was happy that I was lucky enough to be a part of it.

The hustle-bustle that was created with the horde of people from different villages was quite engaging. The festival started with the worshipping of their Holy God, who was kept in sort of a palanquin; there were two Gods actually in two palanquins. And these palanquins were shouldered by a person on both sides and they were frolicking backward and forth in a religiously cheerful manner. Two people were holding the Gods from either side to keep the balance. There were a bunch of people playing different instruments like shehnai, tabla and such. Hundreds of people in Himachali colourful clothing surrounded the procession. The silhouette of pine trees in the background was making the impression of a romantic painting and all these colours in the foreground seemed like God himself has sprinkled all the colours from his palette while rinsing his brush. It was enticingly pleasing to the eyes. This prancing with the Gods lasted for around an hour or so, but I was not allowed to take any pictures for the first 45 minutes, and then suddenly the people started making way for me so I can make pictures, they were telling me that click from here and there and so on. It was all happening in front of a temple in the exterior of the village. In the end, a group of ladies came forward with a vessel in their hand, which threw smoke and did some prayers and just like that the first part of the fest came to an end. I was glad to be witnessing an Indian cult with my own eyes.

For the cultural performances and get together, we all moved towards the other temple in the village. In the ground in front of the temple, a pack of wooden logs was kept in order to be set on fire. People gathered around it, some in their costumes and some just in casuals. Everyone, men and women, had their Himachali cap on, with a small bunch of flowers set upon them. And those who hadn’t, tied their handkerchief over their heads. What made me curious was that most men were holding the swords and daggers. Everyone was almost ready and then it started with a bang. A man set the logs on fire and kids started twirling merrily and then they were joined by men holding daggers and swords. They were dancing with the swords and daggers in their hands when kids made way for them. Another group circled around these cavorting people including men and women. They were all holding each other shoulder to shoulder and their legs moved forward and backward in a very synchronised manner. The circle got bigger and much bigger before the rains brought it to an end.

The next morning, I woke up early and just sat on the terrace of the homestay, in solitude contemplating at the mountains, wondering at the quintessential beauty and calmness in these surroundings. There was no phone network here and I was happy about it. Raj ji brought freshly taken corn from the farms and without any doubt, it was the tastiest corn I’ve ever had. After a tasteful brunch of kadi chawal, we left for Ropa. A few more stops to make on the way until we get back to Bijjal. On the way back we stopped at Raj ji’s uncle’s house to have our late lunch and then moved ahead to go to Shanghad- a vast meadow in Sainj valley. But unfortunately, due to a recent landslide that happened, the road to Shanghad was closed. So, we found ourselves another gateway to happiness and headed to the river nearby. With the running announcements of water being left from the dam and the river level getting high, we didn’t stay there for long. But for as long as we stayed, we had the ultimate fun time with lots of pictures.

Sometimes I feel like, there is such beauty in this world, and there are still many people who are unaware of it. Sometimes I pity my parents, my grandparents, the old people… considering their old age health issues, they can hardly hike up to these places and experience the nature’s wonderful and inexplicable face for themselves. I always try and click as many pictures as I can of such places and take them back home, and the glow I see in their eyes after looking at them gives me all the happiness in the world.

For the final part of this blogpost about the Pundrik Rishi lake and meadow, don’t forget to look for the Part III of Home, Away from Home…

For homestays and travelling itineraries in Bijjal, Majhaan and the surrounding areas in Sainj valley; you can check out Offline Musafir or you can also contact me or leave me a comment below.

Do not forget to subscribe for updates on more travel stories from beautiful, interesting and offbeat places in India and all over the world.